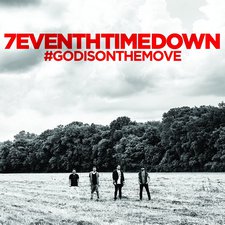 7eventh Time Down
God Is On The Move


Beware the album (or movie or book) title that has a hashtag in its title. This trendy move might seem cutting edge today, but chances are it will seem painfully dated in a few years time.

With that out of the way, the actual album #GODISONTHEMOVE is a fine rock album with strong moments and many impassioned performances. Right out of the gate, the title track slams into gear with excellent production, shimmering guitars and an excellent vocal turn by front man Mikey Howard. With a mix of modern production and southern rock leanings, 7eveth Time Down's sound is a full rock and roll feast that stands as a bit of a relief in the crowded Christian music marketplace of tamer fare. That's not to say that #GODISONTHEMOVE is a revolutionary album, but sometimes hearing an honest guitar solo and some genuine grit in the vocals can be a refreshing thing. "Hopes and Dreams" and "I Still Believe" may be unimaginative titles, but the two songs are powerfully performed, well-produced and heartfelt. Howard has a fine rock and roll voice with a bit of a southern twang, and he uses it to good effect on these two power ballads. "Lean On" does a nice job reworking the classic hymn "Leaning On The Everlasting Arms," but without deriving too much from that classic hymn's melody. Reworking like these, if done well (like here) can bring to mind a bit of church music history without mangling the original tune.

The album bogs down in the middle, with a few too many mid-tempo songs in a row, even if those mid-tempo songs are well-done. Thankfully, "Pray It Down" interrupts the flow with its intense vibe. "Revival" breaks out with a decided country music vibe and dusty guitar rave-up, but is honestly done. "Promises" ends the album with a reference to the old hymn "Standing On The Promises Of God," and wraps up the album nicely.

7eventh Time Down is not rewriting the musical playbook by any means, but #GODISONTHEMOVE, despite its gimmicky title, is a heartfelt and down home project that is well executed. Sometimes meat and potatoes can be a great meal.