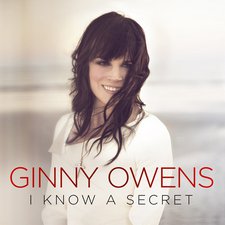 Ginny Owens
I Know A Secret

There are long gaps between albums from Ginny Owens. 2011's Get In I'm Driving (which remains one of the best ironic album titles I've heard) was her most recent original studio album, and there was a five year span before it. She has yet to regain the widespread acclaim that saw her named New Artist of the Year at the 2000 Dove Awards, and it's been over 8 years since her excellent Greatest Hits release. So, you're not to be faulted if Ginny Owens had flown off your radar. Now, however, there's a blip back on that screen, and it's not one to be ignored.

I Know a Secret is a strong, solid return. Of particular note is a return to producer Monroe Jones, who helmed Owens' first three albums. In short, the album sounds terrific. The music is eclectic, but never to the point of distraction, and it serves the lyrics, which are loaded with depth. An a cappella opening line sets the tone: "Yesterday I watched from the top of the world and today I watched the world come crashing down." This is an album firmly entrenched in our modern reality of uncertainty, discontent, and fear, and while it does not hide from tragedy, it does shine with hope.

That's not to say this is all heavy stuff. "What My Life is For" speaks with a knowing wink at the triviality of our "First World problems," but acknowledges the impact of an extra dose of love and thanksgiving in sometimes unremarkable circumstances. There is also breezy pop ("Stumblin'"), a hand-clapping romp ("Live What You Believe"), and sweet encouragement ("Made for More").

Even songs that address themes that are fairly cliché benefit from Owens' unique authorship. "Deeper" is a good example. It expresses a desire for a more mature knowledge of God, and it uses a tired metaphor of our life on the shore in front of a deep ocean of God's love. Despite that, it opens with a line clever enough to rescue the track: "I'm gonna start this song with a question mark." In other cases, songs are elevated by the music. "Without You" is lyrically quite simple, and on paper the repeated line "I can't live without you" might even remind one of a similar U2 lyric. This, however, is a solemn waltz, with piano and plucked strings that are almost hypnotic.

Sonically, "O The Deep" is a standout. Owens sings this version of the hymn "O the Deep, Deep Love of Jesus" with her cousin Christi Dippel, and the recording sadly marks their last duet as Dippel succumbed to brain cancer on April 27th. The song is solemn, almost funereal, which fits its backstory, but the harmony creates such a rich atmosphere that the listener is at once confused - was that a radio broadcast about a war? - and captivated.

Owens has always stood out for her wonderful voice. She remains in fine form here, but suffers from a bit too much "modern" affectation - the sort of pronunciation that turns "fight" into "foyt" - and at times comes across like she's putting on a Cockney accent.

In conclusion, it's a little too hard to resist ending with a line like this one: I Know a Secret is a secret that's meant to be told. It's a pleasure to have Ginny Owens back on the radar.