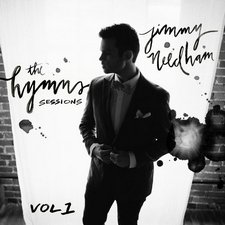 A lot of newly-independent artist have recently jumped on the Kickstarter train, but CCM veteran Jimmy Needham was one of the early adopters. Back in March of 2011, Needham started a Kickstarter to fund his fourth full-length album Clear the Stage. Along with the new album, he also recorded a hymns album that was only available to Kickstarter backers and concert attendees. Now, Needham is releasing the whole project to the general public. As it turns out, The Hymns Sessions Vol. I is one of the better cover albums done by a CCM artist in recent memory.

The Hymns Sessions is a fairly brief ten tracks, two of which are Needham originals. The remaining eight are all traditional hymns, some of which are more well-known than others. The most obscure is clearly the opener, "Christos Anesti," which is a short liturgical hymn for the celebration of Easter. It isn't a great introduction to the album, as it doesn't reflect the style of the other nine tracks and Needham's voice isn't particularly suited to its more traditional sound. Fortunately, the remainder of the album is excellent.

Covering hymns is always a tightrope, and many artists tend to either try too hard to change the original song (either by changing the tune or adding unnecessary choruses) or they don't add enough of a personal touch to really make the cover worthwhile in the first place. Needham walks this line flawlessly, showing ample respect for the original purpose of the hymns while still interjecting his own signature style. He takes both "Rock of Ages" and "Come Thou Fount" and injects a heavy dose of jazz styling into the mix, adding a little bit of fun to contrast with the more somber way many people are used to singing them. At the same time, he plays both "Holy Holy Holy" and "It Is Well" pretty straight, showing that he took the process seriously and wasn't just trying to create gimmicks.

The only track that perhaps does seem a little gimmicky is "How Great Thou Art." Here, Needham abandons the majority of the traditional verses and replaces them with some Trip Lee raps. This might seem borderline heretical to some listeners, but the song is so well crafted that I found myself enjoying the change regardless. Meanwhile, the two original tracks (and especially "It Is Finished") are both excellent, and I daresay far better than a lot of worship songs making their way to radio currently.

This album may not garner a lot of attention, as it was originally just a bonus reward for Needham's most loyal fans. But as a simple hymns project, it's really quite good and offers some unique ideas among today's worship genre. Needham deserves credit for his effort on this release, and hopefully the listening public will notice.