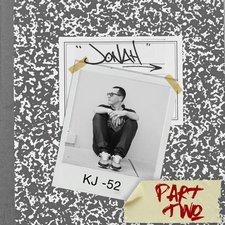 
KJ-52: a boy named Jonah, six-time Dove Award winner, one of the best in the CHH game, and someone that has been doing this for a long time. He's gotta be pushing the 20-year mark at this point in his highly decorated hip hop career. Despite his longevity, KJ simply does not release anything that is not quality and has always stayed consistent in dropping good tunes for all rap heads to enjoy. So, what does Jonah Part Two, his latest independent release, deliver?

The introduction track is KJ being KJ, and by that I mean he centers so much of his tunes around Jesus. "Intro" does that in a very personal way with Jonah giving his testimony. The hip hopper uniquely tells his story and gives a shout out to Dr. Rogers who led KJ to the Savior, making for a superb start to Jonah Part Two. As can be expected with any KJ-52 album, Jonah Part Two is full of fist pumping fun tacks with both "You Know It" and "Birthday" being worthy to be played at your next house party or youth group event. And of course, as stated before, the Floridian rapper keeps his tunes Jesus-focused and delivers a positive theme with head-nodding tracks like "Saw The Light" and "Time Alone." The former hits home while encouraging listeners to "live like there is no tomorrow," and the latter offers a perspective of keeping your head up at all times.

"Worldwide" features Goldinchild; these two collab better than most on any track, and "Worldwide" is no exception. The beats--with old school scratching--are hot and the flow is great. I am certainly digging this head noddin' track for sure as Goldinchild spits "me and K stay moving the crowd, SOI lifestyle, never putting the mic down." "He Won't Fail Me" features Zauntee (who is gaining popularity by the minute) and the two blend perfectly on a tight track focused on trusting the Savior at all times despite our circumstances. If you thought the guest spots were over you're wrong, as "All I Had" features God Over Money's Datin. I thoroughly applaud KJ for using a plethora of wildly different rappers on "Jonah Part 2" and Datin's gritty rap style works nicely with KJ's smooth flows.

Not all is perfect on this short release, however. "Be Like That" comes across as a little disjointed, but my biggest letdown on the ten-track offering would be the album's closing song, "Savage," which "features" the RMG fire spitting rapper Canon. Unfortunately, with combination of the track name and Canon teaming up with KJ, I was expecting something amazing, but instead I got an overly simple hook and KJ rapping about throwing stuff in the trash. Canon wasn't really featured either as he was only used in the hook. In the end, 32 minutes is short for a full-length release, but I think many rappers are going this way lately, unfortunately. As expected, the album is purposefully focused on trusting and living for Jesus, which is what KJ does best. And while this is not his best work, it's still good and current fans of KJ will still be digging this one for a long time.