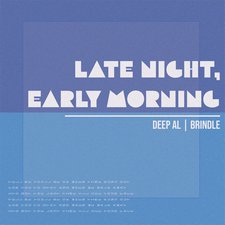 
I remember the moment well; I was about four days into my first bout with COVID-19 and couldn't smell or taste anything. To make matters worse, I had brain fog that only lifted if I was doing something besides laying around, which was all I wanted to do. It was in that state I found myself sweating on my treadmill, silently wondering why I was doing this to myself. You see, I'm a runner, I enjoy putting in miles outside in all weather, but I just felt like death and I hated the treadmill. It's in that moment that I was introduced to this fun little unknown band by the name of Deep Al | Brindle. I'll be honest; my disposition is inclined in a way that I am more of a metal head, which makes the fact that the song I heard that night, "CTRL V" (which wound up on their stellar EP, No Rush, No Curfew) all that wilder. I'm glad to say that their second EP on Tooth and Nail, Late Night, Early Morning has the same sense of borderline wonder and enjoyment.

From the opening notes of "When Time Runs Out," it's apparent that the themes of nostalgia, joy, and community that were present on the No Rush EP are still very much intact and front and center. For this writer, I couldn't have asked for anything better, as one of the many musical bright spots I discovered during the dark year of 2020 have matured and not lost the magic that made them feel special. I was, however, in for a surprise as this time there were discernable lyrics incorporated into the song. After a few listens, I was able to pick up the line "It's not the last time I see your face." Now, I am unsure as to how this fits thematically with the smattering of other lyrics in the song, but I don't truly think that is the point. Deep Al Brindle is first and foremost about the cinematics and artform and they carry that in spades over the course of the short EP.

Probably the biggest surprise on the EP is the feature of KIDS in the closer "Out of Love," which serves as almost a callback to the album opener, with the repeated refrain, "I'm all out of love." It's one of the more "experimental" tracks as it has more of a general song structure and style fans of KIDS and Mirours will find appreciation for. The three other songs that round out the EP - "Prologue," "I.H.Y.," and "Paradigm" are all instrumental indie rock art that will never be mainstream but is comfortable in its own skin. The unfortunate part about this fun outing is that it ends too quickly at only 21 minutes.

In a musical world awash with radio pop groups that do little to make themselves standout from others, it's always refreshing to hear something that is artful and goes out of its way to not sound like anyone. Deep Al Brindle is a band that has no other agenda than to create good music and experience what feels right for the moment. It's this authenticity to their craft that grabbed my attention while running on my treadmill three years ago, and they still bring it to the table in their latest release. I only hope the next time we hear from them it will be in a longer form to give them more of a chance to flesh out the stories they are trying to tell us.