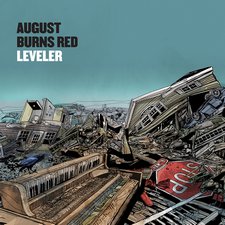 
For a band as machine-like in their output cycle as metalcore titans August Burns Red, the COVID pandemic disruptions surely have been maddening. Their outstanding eighth studio album, Guardians, dropped less than a month into the quarantine of 2020, leaving a planned North American tour with Killswitch Engage entirely cancelled and a band that quite obviously never likes to be bored with all kinds of nervous creative energy and no chance to support their album live on the road. We've seen that energy deployed with new B-sides, instrumental covers of TV themes, and even a livestream performance of their debut album, but mid-2021 now provides an opportunity for a band that cherishes their past work to put the focus on what might be their very best album: 2011's Leveler, now a decade old.

And how best to celebrate Leveler? Instead of just a lazy remix/remaster, or a full-fledged reinterpretation the likes of which we've seen plenty of already in 2021, ABR opts for a middle solution: a re-recording of the album, with a cleaner and more current-sounding mix, and just a few cosmetic upgrades without messing much with a beloved album. In essence, Leveler: 10th Anniversary Edition is another great opportunity to listen to a landmark in the expansive metalcore catalog of Solid State Records -- though perhaps not a reason for the album's most die-hard fans to switch versions.

Since this album in all its re-recorded essence is still Leveler, let's talk about Leveler. The 2009 release of ABR's third album, Constellations, which pushed the band towards a tighter and more structured sound from their early works, brought the band from relative obscurity to a top 30 Billboard chart position, their first headlining tour, and an abundance of anticipation for their fourth album, which could not have lived up to the hype any more. Debuting at number 11 on the Billboard chart, Leveler is an explosive metalcore masterpiece, ripping through monstrous riff machines like "Internal Cannon" and "Pangaea," with blast beats galore, slowing the tempo a bit for the head-nodding "Carpe Diem" and the beautiful extended clean bridge of "Salt and Light" (before the band would begin to over-rely on that clean bridge technique as a crutch two albums later). It all was building to the devastating destruction of what I still believe to be ABR's best song: the album-closing "Leveler," a breathlessly furious piece of progressive metalcore with a spectacular breakdown the likes of which the band has rarely come close to. From front to back, there is not a weak song on the album, and while there is plenty of melody in the guitar riffing, the entire tone is one of uncompromising aggression, all over the foundation of the unbelievable Matt Greiner's blistering and precise machine-gun drumming, still comfortable on his throne as the best drummer in the genre a full decade later. It is one of the best albums that Solid State Records has ever released and it is an essential metalcore album. You should listen to it, whether it's this version or the original one.

Now, let's talk about the "Anniversary Edition" features of this release, from the perspective of someone who has nearly worn out the original CD. As previously mentioned, the mix here sounds quite a bit more polished, with particularly increased emphasis on the overdriven bass guitar and low end, underscored by all of the songs being played either a full-step or half-step lower than their original Drop C tuning. I found I had to tweak my normal EQ settings to get the same enjoyment out of JB Brubaker's fantastic lead guitar work, which can be a bit more buried in the mix at times. For his part, Brubaker says that he is much happier with the guitar parts of this re-recording, since the original 2011 recording was "rushed." Okay, I'll allow the artist his perspective: this still sounds great, and the occasional little lead flourishes or enhanced chorus effects are fun (the slide guitar on "Carpe Diem" sounds exceptional)--but when you've listened to an album you're nearly obsessed with hundreds of times, it's tough to be convinced that any change is better, and I remain unconvinced in most cases here.

A couple interesting additions to the album come from Fit for a King vocalist Ryan Kirby's brief guest appearance in the end verse of "Poor Millionaire" (sure to be replicated live, as FFAK will be opening on the upcoming Leveler tour) and an entertaining guitar solo from Periphery's Misha Mansoor on "Pangaea." The intro instrumental "X" is a good addition, though it clearly sounds like 2021 ABR and not 2011 (not a bad thing necessarily). On the other hand, Trivium's Matt Heafy replaces the beloved solo from "Internal Cannon" with his own rendition that I will confidently describe as a misfire. It starts as a meandering series of scare-bends, takes far too long to go anywhere, and then snaps into a nearly nonsensical shredfest that has nothing really to do with the song being played underneath it. I really like Heafy's work with Trivium, almost without exception, but for someone who spent hours learning the original "Internal Cannon" solo on guitar, it is a compelling reason for me to never again listen to this version of a near-perfect song.

Aside from all its success as a metal album, Leveler is also important to look back on as a spiritual inflection point for the band, the last album with substantial faith-focused lyrics before a 2012 band decision to longer identify as a Christian band. The album name itself and the title track's ferocious breakdown shout is a reference to Isaiah 26:7. "Salt and Light" is a flat-out worshipcore track with its ending singalong shout of "We sing for you!", and the uncomfortable truths of faith-based living are addressed directly in "Cutting the Ties" ("Silence is a frustrating answer / when all you wanted is a sign / Patience is a virtue / You will be revived") and "Boys of Fall" ("He is God / We are just men / Who are we to question?"), among others. While their newest work is not completely devoid of spiritual content and certainly not lyrically objectionable, their faith-based fanbase will certainly enjoy looking back to the album that is the most consistently and defiantly Christian in its lyrics.

Leveler fans don't really need this album -- after all, we have Leveler already, and even though it's not tuned down as low as this (I'll spare you a rant about the silliness of metal's literal race to the bottom), it's still a delightfully aggressive display of fierce metal. But it's also one of the most well-written albums in its genre, and that translates just fine to this re-recording -- even if the tuning and tone feel a bit off at times. I'm just excited that this release could expose newer ABR fans to this classic, and even if I prefer the original version, one way or the other, I just want you to listen to Leveler.