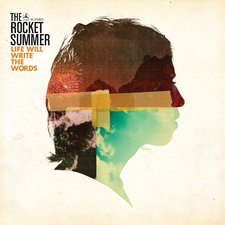 The Rocket Summer
Life Will Write The Words

In 2005, Bryce Avary's The Rocket Summer came onto the scene and all but took over the pop rock territory. While his dominance was mostly in the Christian market, his album Hello, Good Friend ended up being rather popular with pop rock fans outside of the Christian spectrum as well. Follow up albums Do You Feel? and Of Men and Angels both released to critical acclaim, and now, in the year 2012, Avary is back at it with a fresh batch of tunes called Life Will Write The Words.

Like many bands in today's music scene, Avary has fulfilled his record contract and has chosen not to sign a new one. It seems so risky, but with so many bands going independent and producing high quality recordings (not to mention Avary's tight musicianship and creativity), releasing music without the restraints of a record label only seems like a good idea. Listening to Life Will Write The Words, it's impossible to tell just by the sound quality that The Rocket Summer is independent now. The songs sound fresh, creative and clean.

The album gets off to a terrific start with the first single, "Run and Don't Stop." Right off the bat we get a great alternative-laced pop rock sound, akin to the music of Jimmy Eat World or The Starting Line (albeit the teensiest bit poppier). Oddly, it also seems like Avary may have taken a good deal of influence from Bruce Springsteen (which is noticeable here as well as in the song "Just For A Moment, Forget Who You Are"). "Prove It" is a nod to his Hello, Good Friend days, with very subtle hints of Keane and The Fray attached to it. Most of the album is pop rock goodness with full instrumentation: electric guitars, bass, piano, drums, etc. But Avary also fits in a couple acoustic ballads. "Scrapbook" gets the full band treatment for the last forty seconds or so, but the majority of it is just Avary singing accompanied by his piano (similar to Adele's song "Turning Tables." In fact, let's get Adele on this song too, just for good measure). One of my favorite tracks is "Soldiers," which sticks to Avary and an acoustic guitar for the entirety of the track. It can get slightly repetitive near the end, but overall, it's a very enjoyable track with a catchy melody and a somewhat reflective nature.

Influences and comparisons aside, this is also very clearly a Rocket Summer album. Tracks like "Circa 46" and "Underrated" will be popular with longtime fans, and "200,000" and "Ashes Made of Spades" (two more album highlights) seem to tread some slightly new ground while still having Avary's fingerprints all over them. Avary's music and lyrics mature with each album, and despite the "classic" style of The Rocket Summer still present, the music has definitely been successful in growing up along with Avary.

The lyrics of The Rocket Summer have always come from a personal place within Avary's heart, and the same goes for Life Will Write The Words. "Run and Don't Stop" serves as an inspirational, never-give-up opener, as Avary says, "My horse stolen, my ride done, do it, run to it, let them sit back and watch you...the day they stole my horse I started running." He also speaks very fondly of love in a nice pair of songs: "Old Love" and "200,000." The former is more about the idea of the kind of love that keeps couples together for generations, and about how there seems to be a dire lack of that today ("I want to love like my grandfather loved his wife, but I got some problems with the way I tick, we are addicted to the world and we want more of it, my generation heard of old love and commitment, but did it stick?") "200,000" is a bit sillier, but at the same time, it shows how committed Avary is to this non-specified lady friend. He talks about all the things he had done for her: driving all across the country, working dead-end jobs to pay for a ring, and standing up to a gang on his own (not sure if the gang part is true, but if it is, more power to him). It's a sweet and innocent love song that stands out on the track list.

A good word that you can generally count on to describe an album by The Rocket Summer is "fun." Always upbeat, always light-hearted, always innocent; The Rocket Summer is fun. But it's not just fun that makes this album a good listen; it's also Avary's musicianship. Obviously, holding all the creative control over the writing process gives him an advantage, but he also knows how to flesh songs out, he knows what instruments to put in what parts, and he knows how to make a song both accessible and well-written. Life Will Write The Words is a solid addition to his impressive discography, and it's sure to be blasting out of many a car window this summer.

Bryce Avary's self-made project of The Rocket Summer has gone twelve years strong, delivering solid, enjoyable tunes to the masses; his multi-instrumental talent has served him well, to say the least. Now back in the independent ranks after enjoying several years with The Militia Group and Island Records, Avary has the opportunity to create his best work yet completely apart from a label, and Life Will Write The Words may just be exactly that. Whether it's a social commentary on flawed love patterns ("Old Love"), an ode to his happy marriage ("200,000"), or an exhortation to value one's self ("Underrated"), Avary routinely nails his topics of importance with tact, charm, and profundity, all the while combining them with his trademark atmosphere of uplifting and upbeat melodies. In essence, this isn't anything new; Avary has always produced his records with varied, though still very cohesive, material while provoking thought in his listeners. Though Life Will Write The Words doesn't necessarily broaden his musical palette too much, Avary fine-tunes each of the album's twelve tracks to create a musical journey of many features and blisses. While 2010's Of Men And Angels was a triumph in its individual parts, Life Will Write The Words proves to be a much greater whole (even with three fewer tracks), and every song operationally functions well both by itself and in a group. Avary has outdone himself with his fifth full-length release, and as a perfect album to usher in the summer, Life Will Write The Words humbly showcases pop rock at its finest. - Roger Gelwicks, 6/3/12