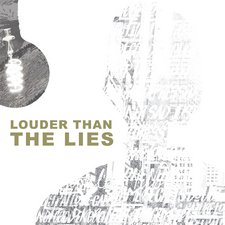 Joel Vaughn
Louder Than The Lies


Rare is the solo musical artist whose Wikipedia page requires seven different genre tags to adequately cover their works, but Tennessee-based DREAM Records artist Joel Vaughn has been reinventing himself for most of his sixteen-year musical career. In his early days as a worship pastor in Texas, he played an acoustic-based worship style before embracing electronic music elements, signing with DREAM in 2015, and putting out two very enjoyable EPs (2016's Kinetic and 2017's Surrender) that led to his identification as a Christian EDM or even "synthpop" artist. Now, four EPs into his DREAM career after the two-part Control series in 2018, Joel brings Louder Than the Lies, a full-length album that delivers a strong message of mid-pandemic hope and encouragement, while shifting the music further in the direction of a straightforward contemporary radio style of Christian pop/rock -- though one of the better versions of that style.

The honesty of our present-day challenges is brought forth immediately, as album opener "Make the Most of It" kicks off with the confession "I wasn't prepared / for this kind of storm / And now I have questions and fears that I've never had before." Surely that's a sentiment that many believers can share in present day, but rather than wrapping the reasonable doubt with negativity, the opener sets the tone with a hopeful declaration to not waste a single day. The second track, lead single "Already Done," encourages those facing trials to "Run right at your mountain / like it's already moved / and you can chase down your Goliath / like you know he's gonna lose" over a lively musical bed.

The next two tracks, "Louder Than the Lies" and "The In Between," are the two songs that most reflect back to the electronic elements of Kinetic. It's unfortunate that they are back-to-back early in the album, because they are both highlights, with swelling synthesizer textures and inventive electronic backgrounds framing the natural vocal. Afterward, the remaining eight tracks almost entirely abandon such electronic elements and solidify Vaughn's direction as a contemporary pop/rock artist, with more than half of the album's songs introed by acoustic guitar or piano. The one musical element that continually stands out throughout the album is the unique electronic drum sounds, which are varied between songs and, especially in the more contemporary radio pop songs, provide a consistently interesting contrast to the other organic instrumentation. The piano-based "Lay Your Burdens Down" is an example of a somewhat plain R&B-influenced song that rises high above its style with a deep kickdrum and thick snare sound.

In whichever direction the music goes, Vaughn's effortless vocal strength is the album's consistent highlight. He can soar to anthemic heights, like in "Make the Most of It" or "Lay Your Burdens Down," or just approach a song with a simple and soulful smoothness, like "Details" or bouncy highlight "I Would Be Lost." Either way, he always sounds natural and unforced, never letting unnecessary vocal acrobatics or production tricks cloud the lyrics. Those lyrics are occasionally a bit cliched, as on the skippable "Seasons" ("Your love is like springtime/pouring down no matter what I'm feeling"), but always remain focused on "hope for brighter days" ("Details") and a heavenly Father who is always willing and able to carry our burdens ("It's Okay", a beautiful re-recording of a song from Vaughn's 2010 album, Don't Give Up, that wisely replaces the awkward mandolin of the original with a lovely cello). Album closer "Satisfied" (a duet with Shinebright's Emily Irene Fertig) is a dynamic expression of worship and reliance on Christ that feels more urgent than ever coming out of the turmoil of 2020.

If you're familiar with the portion of Joel Vaughn's catalog that led to those "dancepop" and "EDM" genre tags, and are hoping for a reprise of songs like "Wide Awake" or "As You Are," you're likely to be somewhat disappointed by his continuing shift toward a more radio-friendly contemporary style, and it's a shame that the album isn't sequenced differently, as most of the interesting diversity is present in the early tracks. Ultimately though, it's hard to not be won over by the outstanding production, unrelenting lyrical focus on worship and hope, and Joel's gentle but naturally formidable voice. More creative and sonically interesting than many current albums in the contemporary genre, Louder Than the Lies is definitely worth a listen, and Joel Vaughn should be in for a big 2021 as his message of hope becomes even more urgent.