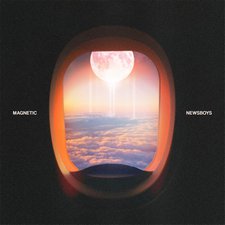 
The Newsboys have returned with their first single of the year, titled "Magnetic," from an upcoming project to be released in 2021 with partner Capitol CMG. While it is unclear if Newsboys United has any additional projects in the pipeline, they do have some COVID-canceled shows to make up this year with live concerts slowly gearing back up after nearly a year-and-a-half shutdown. With that being said, the new song appears to be sans Peter Furler and Phil Joel, with Tait and few others getting the sole writing credits. Without any official announcement that I could find, this would appear to be an upcoming album minus the Newsboys of yesteryear, returning to the four man lineup.

Overall, it has the sound of a song sure to rapidly climb the charts over the summer and give the band a great lead into the new album's (likely fall) release date. "Magnetic" is a fun song and a good reminder of God's faithful love. Count this as another fine song to add to your Newsboys playlist, and keep an eye open for further news of the full album coming soon.