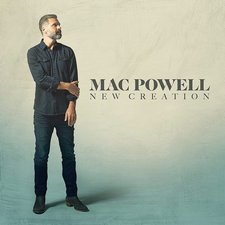 
If there was a distinguishable trend in Christian music this year, it would be "singer in a beloved band releases solo record." With such notable voices as Mike Donehey of Tenth Ave. North and Anberlin's Stephen Christian putting out records in the last few months (and months ahead), notable voices in a new context are a distinct pattern. This nearly always invites questions like "is this current music as good as the artist's work with their band?" or "does this just sound like another release by that band?".

In the case of former Third Day singer Mac Powell, who owns one of the most distinct voices out there -- a gravelly, booming baritone with a decided Southern accent -- the answer is a bit of a yes and a bit of a no.

Third Day did change in their sound over the years, moving from a southern rock band-meets-Pearl-Jam Alt Rock beginning to a more traditional CCM radio band by the end of their more than twenty-year run. But the constant was always Powell's wonderful, expressive vocals. So, by that measure, his new solo release, New Creation, does sound a bit like later period Third Day, but with a Country Music twist that fits his voice and sensibilities well -- but is not nearly as rocking as his old band was.

The rollicking first single, "River Of Life," is a very good opener that features some wonderful instrumentation (dig that high string guitar line that sounds like bag pipes) and enough kinetic energy to light up a small town. The following title track also has a nice swinging energy and a fine vocal performance from Powell.

Most of everything that follows after has a distinct Southern flavor, moving smoothly between Southern Gospel and Country Western music with ease. It's plain to see that Powell was steeped in this sort of music early on, and this style fits him like a glove, even if that might turn off a few old school fans of Third Day. Mac Powell is no imposter on the music front, and from the folksy "Love Is The Reason" to the soulful "Jesus You Are," he gives a bit of a musical tour of the South where his love of this kind of music is evident. New Creation might not be groundbreaking, but it certainly celebrates the ground it covers, and proves that Powell is a veteran that can stop by any time he wants to.