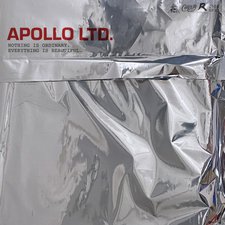 Apollo LTD
Nothing is Ordinary. Everything is Beautiful.


Oftentimes in the music criticism world, the term "pop" is erroneously equated with a song or album somehow being "lesser" or "inferior." But the history of the term "pop" music (short for "popular") simply refers to a kind of melody or sound that has wide appeal to the populace, or general population.

The musical duo of Jordan Phillips and Adam Stark, better known as Apollo LTD, excels at writing and producing the kinds of modern popular songs and sounds that have a wide appeal, but they do so with a craftsman's eye towards music that has both a glossy finish, and plenty of substance beneath that polish. On their second album, the wonderfully titled Nothing is Ordinary. Everything is Beautiful., Apollo LTD roll out another hefty batch of songs that engage both the ears and the soul in equal measure. With musical neighbors like OneRepublic, Paper Route, Bastille, and Imagine Dragons, the duo uses its pop formula for something bigger than mere dancing or momentary distraction.

After a brief, shimmering instrumental intro, the retro-disco beat of "Tears Into Diamonds" pulses with life and introduces the celebratory theme of the album with lyrics that are all-too relevant, yet speak hope into our present dark age of pandemic and social unrest: "Far too long / All these years I didn't know that I was sleeping / Yeah I was sleeping / Then I woke up / To a thousand stars cast across the ceiling / Yeah I woke up / I've bought the lies / For so long that now they feel like mine / And everything / wanted in this life / Was standing in front me this whole time / My heart knows how to feel / Love echoes in the silence / My eyes know how to heal / Turning tears into diamonds." The epic "Patient" also follows this theme well, again, with a relevance to the evening news of the last year: "So this is broken I guess / And if I'm being honest I'm over my head / The hurt rages inside wave after wave like the ocean tide / I've done all I can / It's out of my hands / It's easy to forget / It's part of Your plan, there's a light up ahead / But right now I'm restless, I need You because I'm anxious / I've done all I can / It's all in Your hands / When my world keeps on shaking, and I'm breaking / When the skies won't stop raining, and I'm fading / Help me to be okay with what I can't change /And remind me there's meaning in the waiting Help me to be patient."

But the fellows of Apollo LTD also do a great job of balancing the introspective with the celebratory. The funky "Rulers" features a bouncy piano riff and a great, distorted guitar line that is a welcome balance against all the synthesizers. The celebratory "Good Day" sports a nice guest verse from hip hop act Social Club Misfits and anchors the middle of the album with a buoyant vibe. Likewise, the soulful, Gospel-music infused "Sunday Morning Feeling" (which could be the best Justin Timberlake song that he never wrote) and the jubilant "NOW!" (note that exclamation point) add an upbeat vibe to the proceedings.

Nothing is Ordinary. Everything is Beautiful. is a great "pop" album in every sense of that term. With worshipful moments, like the reverent "No Limit," sitting alongside both introspective and celebratory moments alike, this collection of songs hangs together very well as a musical statement and is a welcome addition to the ole' jukebox, car stereo or kitchen radio near you.

That's not bad for "pop" music.

For much of 2020, Centricity Music pop duo Apollo LTD has been teasing listeners with new music from their sophomore album, Nothing is Ordinary. Everything is Beautiful. Although fans have heard an EP's worth of new songs, the full-length release offers 8 previously unheard new tracks (including a short "Intro"), that builds on the anthemic sound they've woven with their 2020 singles. Those songs fit in nicely with the rest of the record and aren't the only standout tracks here, either. "Just What I Needed" is about as 80s as a pop song can get without having actually been forged in that decade (and it's a delicious pop tune, no less), evoking a distinct Starship vibe, while the impossibly funky "Sunday Morning Feeling" is a soulful song to get you up on your feet no matter what day of the week you listen to it. "Heart Believes" tackles spiritual doubt head-on, while "Soldier On" is an anthem of persistence; both tracks carry more of the militant march feel that for KING & COUNTRY often goes for. When all is said and done, Nothing is Ordinary. Everything is Beautiful. isn't just a solid pop album, but a catchy, encouraging, and fresh 14-song journey that may be one of the best things 2021 has to offer musically. - Review date: 2/3/21, John DiBiase of Jesusfreakhideout.com