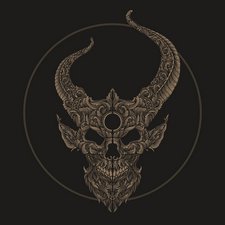 
Demon Hunter has become a staple of the Christian metal community over the years. This year marks the 15th anniversary of Demon Hunter's self-titled debut as well as their 8th full-length album. Only two original members remain, but one is the founder and the creative force behind the band, Ryan Clark. Their last release, Extremist, was a bit underwhelming for many fans and early singles had them wondering if Demon Hunter was going to show a major shift to a more electronic sound with their new album. With Outlive (stylized Ovtlive), thankfully, neither of the scenarios are completely true. While the new record isn't as heavy as True Defiance, it also isn't as soft as Extremist and while there are electronic elements present, Clark's side project, NYVES, hasn't come to life in Demon Hunter. Outlive is a slightly different kind of Demon Hunter album, with a brighter tone, that stands alone.

"Trying Times" starts the album off on a slower note, but not in ballad format. The track contains big drums and some mild electronic ambience before the guitar starts chugging at the 1:30 mark. The intro track leads perfectly into the blistering "Jesus Wept." John 11:35 -- the shortest verse in the bible -- is one of the first verses we learn as kids, but Clark puts a different and more personal perspective behind the scripture as he screams, "I'm why Jesus wept!" The song features a killer solo by lead guitarist Patrick Judge and flows into "Cold Winter Sun," which was written by Judge. "Died in My Sleep" was one of the songs that was released as a single and got a bit of mixed reception. While the appeal has risen after multiple listens, it's still not representative of the best the album has to offer. "Half as Dead" and "Cold Blood" are up next and both are solid jams. In "Half as Dead" Clark exclaims, "When I go to sleep bury me three feet deep. I'm not half as dead as they are; half as dead, half as dead as you." "Cold Blood" gives you the most metal feel since "Jesus Wept," but still comes in with clean vocals on the chorus.

At the halfway mark, Demon Hunter shifts gears to what can almost be described as an alternative rock song in "One Step Behind." "Raining Down" continues the rock n roll vibe with something you may expect to hear from a band like Disciple. While "The End" features a metal inspired verse, the majority of the song -- aside from the breakdown/interlude -- carriers a straightforward rock sound. "One Less" brings the intensity up tenfold, however, and joins "Jesus Wept" as the only true metal songs present; the higher pitched screams and slight death metal influence in the chorus help to set the song apart from the remainder of the album. "Patience" and "Slight the Odds" end Outlive on a somewhat softer note. "Patience" starts with a piano before shifting to the rock sound that dominates the second half of the album. The thing that really stands out is the extremely bright tone of the chorus. "Slight the Odds" starts with soft strings before the guitars strangely fade in as the strings fade out -- almost like a DJ fading two different songs in and out. It's a bit of an awkward transition, but as the song continues, you discover another bright sounding rock tune like "Patience."

Demon Hunter fans hoping for a return to the metal of True Defiance will be let down. Instead, the majority of Outlive feels much more akin to a rock record. The album has heavy moments, softer moments, and plenty of melodic sections. There's also a lot more experimenting with major chords giving many songs a much "happier" tone. Demon Hunter shows they can still be a metal band with great sounding aggressive songs like "Jesus Wept" and "One Less," but I'm not so sure that the band still wants to be considered "metal" these days. They released their softest album in Extremist three years ago, and now Outlive is experimenting with electronic elements -- something Ryan Clark has been drawn to his entire career -- and walking the rock n roll side of the fence. Nevertheless, Demon Hunter's 8th LP is still a solid listen from front to back and a step up from 2014's release. No matter how you look at it, Demon Hunter wasn't content being the same band for their entire existence. While you may not love the results, you have to give Ryan Clark and company credit for trying something new. As we all sit back and wait to see the next step the band takes, enjoy Outlive in the meantime.

Following the band's most accomplished record to date, Outlive attempts to advance the melodic aspect that made Extremist an admittedly controversial record for some. Although Outlive has a strong possibility of being met with a similar response due to its more alternative style, it displays a vast improvement towards the vocal melodies that hindered its predecessor. "Cold Blood," "The End" and especially "One Step Behind" are notable examples of the band's growth in this area, fairing far better than the drier moments on Extremist (i.e. "Last One Alive" and "One Last Song"). "Patience" and "Slight the Odds," despite the latter trying too hard to earn the "epic" description, close the album in a similar fashion. It's just good songwriting.

But for all its improvements, Outlive takes on one too many faults that keep it from being a great album. The two "barnstormer" songs on the record ("Jesus Wept" and "One Less") don't stand out for any reason apart from being heavy on a relatively tame record overall. "Cold Winter Sun" is another fine tune that's hindered by a generic chorus and a structure that shares too much resemblance to "Artificial Light" from Extremist.

Demon Hunter has introduced hundreds of listeners, myself included, to heavier music. They've been staples in the Christian metal scene since day one and I'm confident Outlive will welcome many new fans whilst satisfying older ones, but with a caveat to embrace some change. - 4/3/17, Lucas Munachen of Jesusfreakhideout.com

Demon Hunter will always have a soft spot in my heart. They were one of the first bands that got me into "screaming music," as I may have called it then, with their self-titled release back in 2002. The band has changed in many ways since then, but as of yet, they have done no wrong. Extremist took time to grow for me, but it's a very enjoyable now, and I can say the same for Outlive. Upon first listen, I kinda thought "What's going on now?" But with each and every consecutive listen, it gets better and better. While not the band's strongest effort, Outlive does contain perhaps some of my favorite music, melodies, or riffs that the band has ever written, such as "Raining Down" and "The End." The heavier tracks are fantastic as always, but the higher amount of well-written rock songs makes this their most accessible album to date. Don't sleep on it. - 4/22/17, Scott Fryberger of Jesusfreakhideout.com

A mainstay in the metal arena, Demon Hunter has taken a decidedly less brutal approach on their eighth studio album. The switch from metal to an alternative metal / hard rock sound might be a disappointment to some, but regardless of any unmet expectations from fans, this release contains some of Demon Hunter's best work. The anthemic intro "Trying Times," the brutal "Jesus Wept" (one of only two full-fledged metal tracks on the album), and the catchy hard rock tune "Cold Winter Sun" start the album on an impressive note. From there, the songs tend to be less memorable but still fairly solid, save a couple other standouts "One Less" and "Raining Down." Overall, Outlive is a fine addition to a remarkable catalog. - 4/29/17 Christopher Smith