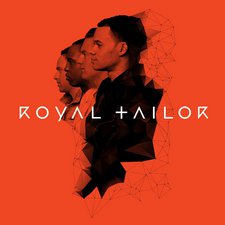 Royal Tailor is a funky, soulful band, let there be no doubt. Lead singer (and dancer) Tauren Wells boasts a golden voice that lands somewhere between Michael Jackson and Adam Levine and the band behind him plays capable, thumping songs. But when a band's production gets to the point of overwhelming the songs, the question has to be asked: is there a beating heart under all those loops and beats? Or if you dig deep, is there a true foundation (artistically, spiritually etc.) underneath all that plastic?

Thankfully, in the case of Royal Tailor's self titled second album, the answer is that there is a beating heart at the center of what they do. With a nod towards the current state of pop music on the radio (think Maroon 5, Bruno Mars and Justin Timberlake) Royal Tailor cuts a funky, dancy path along some serious subject fault lines.

First track and lead single "Got That Fire" features an interesting and arresting intro of rapped lyrics over a sparse drumbeat before exploding into a wall of guitars after a jaunty, old-timey piano riff bridges the gap between. A true "youth group" anthem through and through, "Got That Fire" is sure to be blasting out of church vans on mission trips in the foreseeable future. There will always be a place for this sort of song in the Church, and Royal Tailor executes the performance of this song excellently.

The following tune, "Jesus Love," brings up the point that the word "love" has been given so many different, distorted meanings that the word itself often gets twisted into something it's not. The solution is that Jesus' love blows away every other definition of the word. Set to more groovy guitar rock, the track continues the theme that a song can make you dance and think at the same time. TobyMac's guest verse about his salvation story fits like a glove, and elevates the vibe with a veteran's experience.

Things slow down a bit for the reverent and worshipful "You Are My Rescue." Wells' smooth vocals soar here, and his delivery on this tune is an album highlight. Unfortunately, this song's theme has been done to death, and though there can never be enough worship, there can be enough worship songs that say the exact same thing, in the exact same way. Ditto with the following tune, "Love Song." (The same title and theme can be found in a superior song on Third Day's self-titled album.)

And really, that's the critique of Royal Tailor (the band). They can certainly rock the generic material well. The remaining tracks (the unimaginative names say it all: "Remain," "Start Over," "Making Me New" and "Give Me Faith") on the album float by without making much of an impact. Thankfully, the band saves the epic, six-minute "Fight For Freedom (Let The Walls Fall Down)" for the end, taking the listener on a journey of understanding grace that ranges from a slow build with distorted keyboards to a hand-clapping, shouted party in the middle with snippets of "Battle Hymn Of The Republic" and a fierce rap before settling back down into a soulful refrain and piano piece that extends for almost two more minutes. A few more tracks from wherever this bonus track came from and this album would have earned another star, and a bit more staying power.

For a second album, Royal Tailor shows great growth and promise for the band. A few more tracks like the opening and closing ones here and Royal Tailor would truly have a great album to match all those nifty production choices.

With a vocalist loaded with talent and a soundscape equipped with a flexible grid, a band like Royal Tailor showed much potential from the beginning; and most assuredly, their debut, Black & White, on Essential Records was a grand experiment two years ago. Thankfully, the band is back for round number two with their self-titled album building upon a likable precedent. Conceptually, not much has changed for Royal Tailor since Black & White, but rather they've solidified their sound. While Black & White seemed a little disjointed with competing genres between individual songs, this effort is a bit more unified, majoring on a slick pop vibe with electric guitars and synths still distinguishable from each other. Tauren Wells' vocals are still as tight as ever, reaching the high notes with a humble reserve that uncannily fit the band's pop approach. Each individual song delivers, with ballads "You Are My Rescue," "Love Song," and "Remain" working especially well. Even the bonus track "Fight for Freedom (Let the Walls Fall)" is a great cut, perhaps the most accomplished track of the band's growing catalog. Too-basic lyrics are still a key trouble that burdens Royal Tailor's creative direction, however, as lines like "I'm not holding back anymore/Like an engine ready to explode/I'm ready set go, ready set go" ("Ready Set Go") or "I'm original, so original/ I'm original, the original" ("Original") aren't easy to liven up. Still, the band has locked onto a reliable sound that they can sell convincingly. Though their second album isn't a huge leap forward, Royal Tailor know their audience and are still a fun listen; the next step is trying something truly different. - Roger Gelwicks, 10/21/13