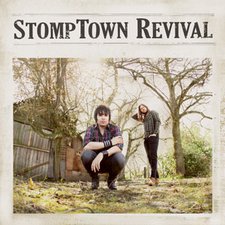 Fans of Americana, rejoice! There aren't many choices for American roots music in the CCM scene, but newcomers StompTown Revival are here to fill the void. While clearly Americana in sound, with lots of acoustic guitars, loads harmonica, some piano and very minimalized drums (they actually use a stomp box), STR manages a little edge with a definite southern rock influence coming out on several tracks of their self-titled EP. The duo of Brandon Bee and Gabe Martinez (formerly of Circleslide) have teamed together to forge a sound that sounds classically American, but yet new and refreshing in today's worship and pop/contemporary-saturated CCM.

The album starts with a modest and soft acoustic guitar intro in "Guiding Me Home," but forty seconds in, the southern rock influence shines through with the muddy sounding distorted electric [slide] guitar. The opening track sets the pace for the rest of the album and shines as one of the top tracks. Next up is another stellar track in the harmonica laden "Waiting for the Man to Come." The song has an impeccable groove that will no doubt have you bobbing your head and singing along. "Born Again" is a slower addition to the EP and proclaims, "Oh, maker of Heaven, won't You, won't You make me born again?" The song features a lot of harmonica and the simplicity of the stomp box yet again. "Anthem of Love" brings back the southern rock feel on an anthem that just may be tops on the record. "The Sun Will Find a Way" is the final original piece on the six-song EP. The first five songs alone would make an outstanding EP, but the Seattle duo also added a cover of the classic hymn "Leaning on the Everlasting Arms." With hymn covers and projects coming back into the forefront of Christian music again, STR hit it out of the park with their rendition as they were able to find that perfect balance between staying true to the original and being 100% themselves.

Brandon Bee's vocals are spot on for this style of music, but you may never guess it from hearing him talk. The same goes for Gabe Martinez whose looks may deceive on his abilities on harmonica (an instrument that usually sounds terrible or amazing with no middle ground). The album also features some nice vocal harmonies as Bee and Martinez sing together. STR shows their heart for God in their lyrics and their love for music with the entire package. The biggest detractor may be the style of music itself, however. For many listeners, the thought of slide guitar and harmonica will be enough to turn them off without a second thought. If you're into southern music, especially Americana, give StompTown Revival a listen for sure. While waiting for the full-length album, head over to their website to become a citizen of StompTown, or possibly even the mayor!

On Stomptown Revival's debut EP. the guitars are as thick and fuzzy as five day stubble, the harmonica is plentiful and distorted and the harmonies of Brandon Bee and Gabe Martinez are of the old-timey, backwoods variety. There has been a resurgence of gritty, soulful gospel music in the last few years, and Stomptown Revival's debut fits in nicely between Needtobreathe's soulfulness and unapologic southern flavor and All Sons & Daughters' vertical songs of praise. In theme, Bee and Martinez work familiar metaphors into surprising new meanings. "Waiting For The Man" uses a mournful harmonica to open a spooky song about the world being redeemed when Christ comes back. In "Born Again," the familiar phrase is used in a fresh sense of wanting a new start, of needing grace daily and not the "one time and done" view of salvation. At times, Stomptown Revival can seem a little too in love with the blues and gospel, to the point of being a slave to the genre's conventions of instrumentation and vocal inflection. But as this is just their first time out, much of that criticism will have to wait for the future. For now, this EP feels like a palate cleanser from over-produced and same-sounding worship music. When "Leaning On The Everlasting Arms" hits at the end of the project, it feels like a song that has just been written, and as fresh as an Appalachian sunrise. - Tincan Caldwell, 10/1/12

Record Label: Save The City Records