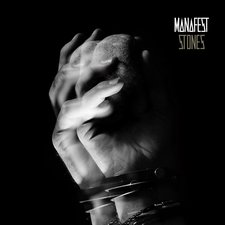 
With the recent decline of Christian rap-rock artists, it's refreshing to see sub-genre staple Manafest bring a new album to the table. Ever since his breakthrough LP, 2010's The Chase, his offerings have been hit or miss. Each project has contained some solid tracks, but consistency has been more than evasive for the Ontario-based Canadian artist. The overall production value on Stones is of high enough quality and demonstrates a step in the right direction, but the album is not without a few flaws.

Manafest kicks of his 2017 excursion with "Stones," the album's title track. It's a bold move, serving to showcase his rap, rock, and vocal strengths. The edgy guitar --and even piano-- elements are front and center, setting the bar quite high, perhaps comparable to the peaks of The Chase. The lyrics are another story, however: "You know you can't touch this, no / so go and throw your stones 'cause you're not even close / yeah, you're moving too slow so let it go." They're not awful, but digging for depth here will yield little fruit. If it weren't for a brief line in the verse ("the prodigy; honestly it's been the God in me"), this track would sound outright braggadocios, to the point of folly.

Unfortunately, follow-up track "House of Cards" is a better representation of where the album is going. The melody feels uninspired and is a bit grating after the third listen. The lyrics once again fail to stand out, making this a mediocre song. Thankfully, "Firestarter" is a curious piece; listeners will either love it or hate it. Musically, it's highly reminiscent of And Then There Were None's pop/synth swan song foray. It's a welcome push in a new direction that doesn't come across as forced, instead fitting in smoothly with surrounding tracks. "When the Truth Comes Out" provides simple lyrics, but a powerful message. It's nothing too complex, but it's a likeable and satisfying listen. "Find a Way to Fight" mostly disappears in the midst of Stones, and is something of a low note on an album which already can't afford many of those.

"You're Gonna Rise" is a shameless attempt at receiving radio coverage by K-Love and the like... and it's actually really good. As much as the concept of "rising" (from one's troubles/hurt/doubt/brokenness) has become a CCM buzzword in recent times (years, or decades, really), it is indeed a potent aspect of Christianity, and a message that's worth singing. "Blow You Away" is a solid piece, and carries rock textures which fans of classic Fireflight will find comfortably familiar.

"Coming Back" is easily an album highlight, boasting a happy-go-lucky feeling and west coast surf-hop vibe (think Paul Wright/Rootdown). Its lyrics are solid and fit with the song's composition: "Shipwrecked in Toronto, left my heart in the waves of the west coast / stopped dreaming 'cause I wake up every time, mama's taking photos / I got frame after frame of the high notes / I've been so high, been so low / but no matter how long the road / I'm never too far, never too far to come back."

"Merry Go Round" is another great album highlight and marks itself as a throwback to Manafest's best offerings, despite its oddly vague lyrics: "Tell me "I'm an angel, I'm a demon, you hate me / then you love me till you're leaving me crazy / round and round we go, can't get off this merry go / kick me down and you're trying to kiss me / I can't figure it out." The song seems to be chronicling a romantic relationship, but it's hard to discern where this thematic transition took place. While "Amplifier" is another made-for-radio track, featuring Alicia Simila on guest vocals adding some much-needed texture to the album. The closing track, "Won't Give Up," has a great message and sees Manafest return to the rap-rock formula, albeit softly. It's an acceptable track on its own, but doesn't do an adequate job of (musically) tying up the album.

Ultimately, the album's greatest shortcomings are found in its lack of lyrical depth. None of the songs are of poor quality, and some are indeed quite enjoyable. If anything, Stones feels like a just above-average missed opportunity. Manafest is extremely talented and his skill bleeds through quite often this time around, but while the album is a success, we can hope for more home runs next time. If you're unsure of what to bite off first, "Merry Go Round," "Coming Back," and "Stones" are worth sampling.

One thing that I really enjoy in music is the rap/rock genre which is mostly non-existent in today's Christian music scene. Manafest is one of the artists who still (although not as much as I would prefer) dabbles in the rap/rock scene and I absolutely loved his earlier albums. Mana has stayed the course and is still making tunes on a regular basis with Stones being his eleventh release since he came onto the scene in the early 2000s. The title track opening this album is exactly what Mana fans expect and it's a solid intro song. "House Of Cards" carries some really solid guitar riffs and speaks to standing strong in difficult circumstances with lyrics "I refuse to call it quits," screaming the song's purpose perfectly. Other songs that are worthy of note listed on Stones would be "Find A Way To Fight" with its superior drumming in an anthem-style track sure to make fists pump, and "Amplifier" which uniquely carries a pop-electronic-club-booming feel where I can't help but appreciate the creativity.

As with most albums, not all is perfect on this release as some tracks could be labeled as just fair. "Firestarter" speaks a positive message of bringing light into a dark world and "You're Gonne Rise" reminds listeners to seek truth in difficult circumstances, but both songs fall flat to me. And while I enjoy Manafest's attempt at bring such a multifaceted music style (one that touches on rap, rock and pop), his vocals are not as fine-tuned as they could be, which can be heard on "When The Truth Comes Out." When he raps in this song, it's great, but the vocals sound a bit overstretched at times. All in all, the theme and focus of Stones is on point and encouraging for listeners. I personally wish he would stick to his sweet spot of rap/rock, but he definitely has an appeal to a much broader scope of fans. Fans should definitely check this out even though it may not be Mana's best work to date. - Review date: 6/16/17, written by Kevin Hoskins

Stones is Manafest's first rock album since 2012's Fighter, and while I personally haven't loved his past few releases, I'm finding quite a bit to like on Stones. "Find A Way To Fight," for example, is a solid rocker that makes use of some punchy riffs and an anthemic chorus. Further highlights include the adrenaline fueled "Merry Go Round" and the pop inspired "Amplifier." Both are fun tunes I've been finding myself replaying quite often. While a handful of weaker tracks ("House of Cards," "When the Truth Comes Out" and "Coming Back") hold the project back as a whole, Stones is an enjoyable effort nonetheless. - 7/22/17 Lucas Munachen