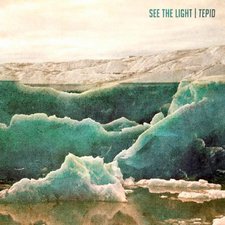 It was in May of 2009 that Come&Live! metal outfit See The Light released their debut EP, Maranatha. Their Devil Wears Prada-esque personality and ministry/worship-centered lyrics teamed up to create a terrific EP that demanded to be listened to on multiple occasions. After a successful campaign on Kickstarter in 2011, the band was able to fund their latest album, Tepid, which they also released for free download through the Come&Live! website.

After about a minute of staticky build-up, the album gets started off with some intense metal like what See The Light delivered on Maranatha. It's heavy and borderline chaotic, but structured enough to still appeal to metalheads who need more structure. See The Light manages to ride the line between the off-the-wall antics of The Chariot and the technicality of Oh, Sleeper. One part of "Rise," both vocally and musically, also reminds me of Once Nothing, while the following section of the song brings to mind As Hell Retreats. And while I'm bringing up a lot of bigger name artists to compare to See The Light, it should also be noted that See The Light doesn't seem to be aiming to specifically sound like anyone else. Of course, metal and hardcore can be hard to make 100% original (these guys do have the occasional breakdowns after all, such as in "Malcontent"), so there are bound to be some sound-alikes, but See The Light is still their own band despite who else they may sound like at times.

One interesting thing about Tepid is the group of three tracks called "Disconnect" (with each one having its own subtitle: "The Desirable," "Breathe" and "The Outcry," in that order). Each of these three tracks takes the heavy music out of the picture and replaces it with softly-picked guitars and some ambient noises in the background. However, some hardcore element still remains, as Bear screams over the ambience. In these tracks, Bear screams and yells in pure desperation, longing for Jesus to burn away his impurities and bring him into everlasting life. This is also a theme that is spread through the entirety of Tepid. In "Decay," Bear says "Filthy and tepid, I feel hollow inside, this emptiness, this bad taste still remains, I crave rejuvenation, Holy Spirit my lungs beg, let this air be filled of You." The sentiment is repeated, in various wordings, throughout the album's nine tracks. Sometimes the lyrics can seem to be more "Christianese" than anything, but thankfully, it's not too often.

Tepid is another solid album from the Come&Live! metalheads See The Light. Fans who donated to their Kickstarter already have this album - some of them have it on cassette (kids, ask your parents) - but everyone else who enjoys metal and hardcore music should also invest in it. It's one of just a small handful of metal albums to be released thus far in 2012, but it has potential to be one of the strongest of the year. Time will tell, of course, but go ahead and give it a listen and see what you think. Tepid is for fans of The Devil Wears Prada or xDEATHSTARx.