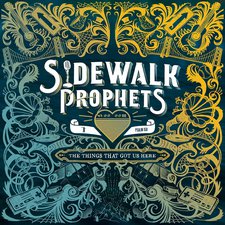 Sidewalk Prophets
The Things That Got Us Here


Nashville-bred pop outfit Sidewalk Prophets have been around since 2003, yet they seem to get lost in the shuffle of the Christian radio scene. Much like being mistaken for someone else by having "that kind of face," you've probably heard their songs on the radio, without knowing it was them. While they've won Dove Awards and have many songs filling the airwaves, their overall sound hasn't had much, if any, trademark influence and has not tapped into their enormous potential nearly enough. Their fifth studio album, The Things That Got Us Here, while being relentlessly joyful, doesn't do enough to break that mold.

The album begins with a brief hammer-dulcimer intro, which leads into the made-for-radio single, "Smile." As the title suggests, this song is as upbeat as they come, and we're re-introduced to the powerfully polished vocals of frontman David Frey. Unfortunately, the lyrics are too generic and don't delve into reasons why the listener should rejoice. This is the case throughout much of the album, such as in the Switchfoot-esque rocker "Let Go Your Troubles," where we're rightly encouraged to "let go your troubles and wave goodbye," but there's nary a vague reference to the only One who can save us from our troubles and fill us with joy.

Where the album does succeed, however, is when the band breaks out of the radio-pop box, showcasing Frey's vocal talents and deeper lyrical themes. The vulnerable "Real To Me" deals with Frey's doubt, searching, and eventual saving the moment God came into his life, "I've danced in the sun, I've run through the rain, felt joy take the place of the sorrow and the pain. It took my everything, now I believe, You became real to me." Frey's relatable testimony, combined with his convicting vocal performance, make this an album highlight. Another bright spot is the country-shuffle tune "Don't You Think It's Time," which uses folk guitar and soft drum brushes to create a peaceful setting asking a media-saturated culture to "turn off the TV, cause we've got the real thing...don't wanna let this fly by, scrolling through someone's sunriseOh I think it's time." Other standout tracks include the house-pop number "There's A Way," the Imagine Dragons-style "I Believe It Now," and the imminently relevant "The Comment Section." The latter quiets things down with a subdued piano and heartfelt lyrics, pleading with our generation to use discretion when conducting ourselves on social media.

Though The Things That Got Us Here showcases Sidewalk Prophets' infectious joy and happiness, it does nothing to help formulate a sound that is uniquely theirs. Many of the songs could be mistaken for another band's material, like the carefree "Don't Sweat It" which reminded me of Taylor Swift's "Shake It Off" from the repetition of the main hook, right down to the quasi-rap bridge, and no song made me think "this must be Sidewalk Prophets." While Frey has one of the best male voices in Christian music today, it's too often drowned out by radio-friendly compositions with simple melodies, and simpler lyrics. That being said, it's hard not to be uplifted by the Prophets' jovial sound and positive message. Fans of deep, introspective songs may want to look elsewhere, but if all you're looking for is something fun and uplifting to listen to this summer, The Things That Got Us Here will no doubt give you a reason to smile.