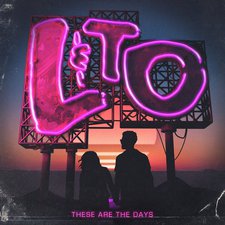 Love & The Outcome
These Are The Days


Love & The Outcome splashed onto the scene in 2013 with their self-titled debut, an album coming from a place of confusion and tragedy in a newlywed couple's lives, summed up in the song "The Story You're Building In Me." But in a new season of life three years later, the wife-husband duo Jodi King and Chris Rademaker are back in action with These Are The Days, a somewhat unexpected follow-up that maintains a balanced perspective.

From a musical standpoint, Love & The Outcome seem like a straightforward outfit of CCM pop, and their debut demonstrated this with standard Christian radio-ready numbers with the occasional standout, such as the contemplative "The Story You're Building in Me" and the bass-heavy "Bring Us Back." And even in a live setting, things stay minimal: Chris plays either the guitar or bass, Jodi takes the keyboard and a floor tom, and sometimes a session drummer joins them on stage. But going forward, the band has gone out of their way make album number two a different game, and the three year wait since the band's debut seems to have done wonders on the band's creative outlook.

These Are The Days attempts to compensate for the lean manpower behind the band to create a much fuller, layered, electronic-infused pop vibe. Especially following last year's live acoustic Ocean Way Sessions EP, the new-wave 80's inspiration present here is jarring, but it's a welcome experiment, even if not every single track nails this sound perfectly (songs like "Hear From You" probably could have benefitted from more restraint). Jodi's vocals go perfectly with this loud sound, too, and they carry each song to the finish, no matter how dynamic the melody. At first, These Are The Days seemed like it might have been off to a bad start with the earlier release of the lead single "The God I Know," which is admittedly one of the band's weakest cuts of their discography; it feels like a paint-by-number radio hit that any other band could have performed. But the rest of the album holds much more promise, and that's good news. "Strangers" begins the album with a bang, while "Ends of the Earth," "Gates," the title track, and "Paradise" all capture this retro sound with poise.

Jodi and Chris wrote the songs for These Are The Days during a much brighter season of life than their debut, not the least of its events included the birth of their first son. On a song like "Good Life," lyrics like "One good day makes you forget all the bad ones" could sound trite and shallow, but the album is coated with a firm realization that it could all go to pieces at any time. "Palaces" recognizes the source of life's victories ("If I win the battle, it'll be on my knees"). On this same note, "If I Don't Have You" examines the double-mindedness that often comes with following Jesus, and the upbeat title track sums up where the band has been and where the band is going; this self-awareness throughout the album keeps the album far away from a prosperity-driven, "everything-is-awesome" mentality. "Seek & Find" is an appropriate ending to a well-balanced celebration of life's good things and where they come from.

After Love & The Outcome's serviceable debut, These Are The Days makes a much bigger statement about the band's longevity and vision. Sophomore slumps are common in this industry, often happening as the result of weaker songwriting and less creative output. Instead, Jodi and Chris deserve all credit for creating a balanced, experimental and hopeful effort; everything is rooted in Jesus as the center of all, and it's musically like nothing else released this year. Taking creative chances and being unmistakably worshipful in the process, These Are The Days is a solid entry in the CCM sphere this fall.

Husband and wife duo Love and the Outcome broke into the scene three years ago with a solid, yet radio-friendly, debut. Despite feeling routine at times, it introduced a potential that begged to be fulfilled next go around. These are the Days, the duo's sophomore effort, is an excellent follow-up, setting their creative sights higher than what was previously accomplished. An almost tangible throwback sound to the pop of the 80s permeates this record from beginning to end, giving the album a chance to stand apart from its contemporaries. The most notable tracks are the worshipful "Galaxies," the jovial "Good Life," and the wonderful ballad "Louder, Closer, Deeper." The record's biggest flaw is its pacing, with the slower, more average tracks dominating most of the middle ("Gates" and "Palaces"). This leaves the beginning and end to showcase the album's stronger moments, introducing a chance to lose attention elsewhere. Nonetheless, those more inclined to songs in this vein will adore what's offered here. These are the Days is nothing short of a success and one of the most terrific highlights of CCM this year. It's a must-have. - Review date: 9/23/16, written by Lucas Munachen

Canadian husband and wife duo Love & The Outcome's These Are The Days is filled to the brim with strong songwriting efforts and creative twists on familiar sounds. The pop here isn't groundbreaking, but it's filled with flourishes on familiar sounds and ideas that lift up the songs to greater heights. Opening number "Strangers" explodes with energy and verve with an 80's rock vibe (particularly in the programmed drums pattern at the beginning) that sets the tone for the album. First single "The God I Know" boasts a ultra-catchy refrain, but unfortunately rhymes "the God I know" with the cloying phrase "you gotta' know". The retro 80's keyboards help turn third song "Galaxies" (a mildly-epic treatise on the nature of God and His creation) and forth song "Good Life" into enjoyable numbers that bubble with energy and new wave synths. The title track, a simple-yet-epic reflection on seizing the day, is the best song here, sounding a bit like something that 10,000 Maniacs would have put out in 1988. In fact, the 80's, college rock vibe is a refreshing sound in modern CCM, and takes the pop offered here to interesting places. Love & The Outcome make the most of the sounds available to them, and use them in the service of interesting and heartfelt songs that cover familiar territory in new ways. The generous helping of thirteen songs here show a duo with a bright future ahead. - 9/22/16, Alex Caldwell of Jesusfreakhideout.com