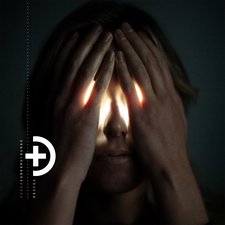 
The Storm Before the Calm, Death Therapys dark and heavy, yet surprisingly guitar-less debut release, was met with critical adoration. The freshman album was able to create an impressive atmosphere without the need of the traditional metal guitar sound. Using chunky synth and bass layering, along with various types of unclean vocals, it painted a darkly beautiful work of art. Voices looks to be both a musical and thematic successor but, sadly, with some diminishing returns.

The opening track, The Vice of Voices sets a moody tone right away. Painful admissions of betrayal describe someone questioning the reason for their very existence. When the track kicks into high gear, a choral arrangement chants the word voices over lyrics questioning the existential conflict of desperate, mortal existence. My Defiance is the equivalent of coming to grips with ones purpose and determining to persevere in the midst of insurmountable hardships -- to stand face to face with the giants and show the world that they still bleed. The third track, Feels Like Fiction, establishes the thesis of the album. An honest critique of the state of the world, it compares the future hope offered in the Bible to the current state of humanity right now. Statements such as, I hear you say forever awaits, but it seems so far away It feels like fiction to me, are punctuated with a diatribe against complacency and commanding action to fight the evil before us in the present. The rest of the album further supports this theme of endurance in the fight against the darkness of sin. The original Death Therapy album contained chip-tune style tracks inspired by the classic video game series, Castlevania. Voices contains the track The Instability of Proto Man, seemingly inspired by the MegaMan series. This instrumental track, which contains 8-bit stylings as well, ties into the thematic implication of mans current state of imperfection and incompletion. The album finishes with Darkening Counsel Part II: Inquisition, which resembles the conversation between God and Job at the end of that book and really hammers home the vastness and omnipotence of God and His Sovereignty.

Unfortunately, a lot of the groove elements that made The Storm Before the Calm so captivating feel less impactful this time around. The remnants are there, but Voices feels less unique than its predecessor. There is no moment throughout the album where anything seems bad, but musically, the album is far less potent than its message.

Voices contains a strong encouragement against apathy and laziness. It is both a rebuke and a pep talk at the same time. However, it just doesnt stick with you the way that The Storm Before the Calm did. This will likely be disappointing to fans who fell in love with Death Therapy in 2017. If the lyrics sound interesting, you should give it a listen, but over all of this is a hard album to recommend without at least a few qualifications.

Death Therapy surprised us all in 2017 with a sound very unlike Jason Wisdom's previous band. But it went over well with fans, myself included. Voices is a fitting sophomore release, taking the formula from the first time around and making a new batch of songs that mostly sound nothing like each other. The bridge on "Feels Like Fiction" (courtesy of Silent Planet's Garrett Russell) is simply amazing, and I can't get enough of "The Instability of Protoman." And that monstrously sized "Darkening Counsel II" is a magnificent closing track. Death Therapy is now two-for-two on solid albums. New and old fans shouldn't be disappointed. - 4/10/19 Scott Fryberger

Following up a debut as brilliantly crafted as The Storm Before the Calm was never going to be easy. Unfortunately, Death Therapy's sophomore project falls short of expectations as it attempts to branch out and play around with the formula. Although this greater sense of playfulness is to be applauded, at the same time, it causes the record to become awfully uneven and unfocused as songs frequently meander into illogical and seemingly arbitrary passages of music ("Feels Like Fiction"). At other times. songs rely too heavily on cliches ("My Defiance") or else spiral into completely underwhelming moments of empty space that should be more fulfilling and engaging than they actually are ("The Reckoning" and "It's Okay"). With some more fine-tuning, and a stronger focus on delivery, Voices could have been another home run, but as it stands, there is sadly little worth salvaging. - 4/16/19 Lucas Munachen

Voices, Jason Wisdom's sophomore effort as the experimental metal Death Therapy, has a much wider variety of influences than their debut. The catchy industrial sounds and faux-8-bit forays are still there, but with a plethora of guest features on the album, they also find themselves adopting hints of the sounds of their guest's original acts. It makes for a less-consistent experience (the penultimate "Darkening Counsel I-S.P.E.C.T.R.E" in particular changes the feel of the album), but there are enough memorable breakdowns and fun jams to sustain most listeners, and there's some lyrical depth here too. - 4/14/19 Mark Rice

Death Therapy carved a niche among Christian metal when The Storm Before the Calm released in early 2017. The sophomore effort, Voices, continues in the same vein as their debut, with self-described industrial groove metal (with a little less emphasis on the "groove" this time), well-placed guest features from Christian rock and metal, and an 8-bit instrumental track. They amped up some of their gothic influences this time around, which is a nice complement to their sound--especially on the "Darkening Counsel" tracks. If you liked their debut, you're likely to enjoy this as well, or if you are looking for something different in Christian metal, give Death Therapy a try. - 4/22/19 Christopher Smith