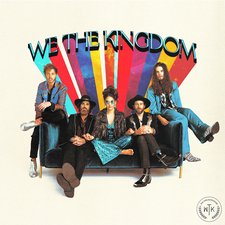 
Though it is far past its cultural dominance, real rock and roll, the gritty, pulsating slightly unhinged kind, is still a thrilling thing to experience. When the guitars are loud and untreated by too much technology sanding the edges off, and when the vocals and drums sound real in all their imperfections and hiccups, the results are still (to use a term in its most simple form), miraculous. And a real rock and roll band that gets played on Christian radio is something to shout "hallelujah" for as well. Christian music has long had a reputation for sanitizing rock and roll into a more palatable (for all those families listening), greeting card "muzak" version of the form. So when an artist somehow slips through that process and manages to gain an audience over the various platforms out there, it's a cause to celebrate.

We The Kingdom is such a band. With an old-school Southern Rock sensibility (right down to the "family band" tradition of that particular brand of music) and great songwriting instincts, the group is a sonic treat to hear live, and that live energy has thankfully translated into their latest self-titled album.

With a tip of the hat to The Who (dig that shimmering, echoing guitar intro reminiscent of that band's "Won't Get Fooled Again"), opening number "Left It In The Water" explodes into a swampy, bluesy monster of a song that The Rolling Stones, circa 1968, would have been proud to write. The twin lead vocals of father and daughter Ed and Franni Rae Cash blend in a thrilling, vintage elegance of having likely sung together most of their lives. A wonderful troop of backup singers round out the vocal attack, and the album is off to a fantastic, raucous start that will be a thrilling opener for the band on tour for a long time. With a nod to baptism, the lyrics put a fresh spin on this ancient sacrament: "Everything I was, everything I've been / God, I've got my regrets, I was a wretched man / But You called me on down to the water, met me by the riverside / Yeah, You took me in, You drowned my sin / And said, "Dead man come alive!" / Then I left it in the water / My yesterdays are history / Left it in the water / Like I went down dirty but I came up clean / Left it (left it) / I left it (left it) / I left it in the water."

The following number, "Mine," swings with a slower, Gospel music groove that features a fantastic group harmony and a great use of Hammond B3 organ as well as a nice, reserved but powerful drum performance from Ed Cash's son, Martin. Third track "Jesus Does" moves even closer to a Sunday-morning-in-the-south feel with a soulful performance all around. "God Is On The Throne" keeps this portion of the album in 70's soul territory (a genre fully influenced by Church music), while the following "Deep End" returns to the high-test rock and roll of the opening song.

Unfortunately, the album falters in its back half, with a number of odd choices (like the unusual, Broadway-lite "If I Gave You My Heart," or the sincere, but musically flat final song, "Family") that loses most of the great energy of the front half of the record.

But, for a while in its beginning, We The Kingdom is a thrilling ride that will quicken your pulse and move your feet and soul. Here's to authentic music and hearts that want to sing about their Savior.