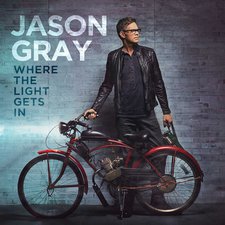 Jason Gray
Where The Light Gets In

This world is full of brokenness, and this fact is not often in dispute. Whether it's the news headlines blaring out from a television or the news stand, or information on a more personal level--like the personal failings of a friend, or a family member's medical test results--the darkness of this world finds its way into every corner of our lives. And, oddly, Christian music rarely addresses this darkness well. In the name of being "positive," much of what gets airplay and exposure is shiny, happy music that fails to adequately or fully address the reality of the fallen world we live in.

Jason Gray seems to be on a mission to address this oversight. On album after album, Gray pokes at the darkness like few writers in Christian music do, exploring the subject with both humility and heart-breaking expertise. Largely a musing on the failure of his long-term marriage (personal failings might be the toughest kind of darkness to overcome), Where The Light Gets In could be one of the best albums of its kind, the rare species that addresses darkness without wallowing in it, and juxtaposes personal failings in light of the awesome grace of God.

Taking a cue from the sonic blueprints of Peter Gabriel and Coldplay, Where The Light Gets In also finds Gray at the top of his game musically. Opening track "Learning" might seem like familiar Jason Gray fare (sounding like a cousin to his previous hit, "Remind Me Who I Am"), second track and first single "Sparrows" spins a mournful piano line and melody into a hopeful and poetic song about God's provision. "There's not a single star that's out of place / and there's nothing broken He can't remake / if you long for hope when you're afraid / just look at the sparrows."

"I Will Rise Again" finds Gray at his most epic and show-stopping best. With a Broadway-ready musical build and an orchestral and gospel choir backdrop, Gray drops a low-register and low-key rap about loss of faith and rebirth that builds into a great crescendo that is earned, "I'm not who I was / you won't recognize me / love came down and redefined me / and piece by piece / put me back together differently." Inspiring without being cloying, and honest without being morbid, "I Will Rise Again" is a terrific and hopeful song that will sound great live.

Gray writes candidly about his divorce in "Death Without A Funeral" (possibly the best description of the gut-wrenching nature of divorce this reviewer has ever heard) and "The Wound Is Where The Light Gets In." Both songs find Gray at his most emotionally raw and vulnerable, and are bare-bones musically, with just Gray and his acoustic guitar. "Death Without A Funeral" in particular weaves as devastating a set of lyrics about divorce as have been penned in Christian music, "There's no stone to lay the flowers down beside / no mention in the paper / though something clearly died / no gathering for family and friends to eulogize / it's a death without a funeral / there's no book to sign for people filing in / no table full of pictures where they'd say 'remember when" / no song is sung about how all good things come to an end / it's a death without a funeral."

The end of the album, with its triumphant and tonally out of place "Celebrate" and "Glow In The Dark" (though both are fine songs), blunts the edge of the message a bit, but the album ends well with the mellow and reflective "Thank You." Sporting a wonderful 80's-inspired keyboard riff and programmed drums, "Thank You" is a great sounding song (think Peter Gabriel's classic "Solsbury Hill") that brings the album theme full circle and ends it well.

Where The Light Gets In is a terrific, well-crafted album that mines the darkness of its theme well, both lyrically and musically. It's by far Gray's best overall album and one of Christian music's finest statements on the how the Lord can take the mess we make and shine His light through it to make something new and wonderful.

Where The Light Gets In, the newest release from longstanding contemporary Christian pop artist Jason Gray, is a puzzling listen and an even tougher study. The catchy beats, choruses and hooks are inviting, but, on the whole, the experience offered by the album is best enjoyed in passing. When challenged with undivided attention, the album's lack of creative depth and questionable utility becomes apparent. Think about it like a summer day trip: it's a fun time at a seemingly attractive locale, but there's a reason you don't live there right?

To begin with the positive, Jason's Gray vocals are above average to say the least. Equal parts crisp and warm, Gray's singing carries the release much farther than a lesser talent could. In this way, the album makes a wonderful first impression, soaring when the composition catches up with the vocal delivery. Both the opening and closing tracks characterize this synergy in different manners, with "Learning" being the upbeat radio hit and "Thank You For Everything" relying on accented acoustic guitar and piano for a more intimate feel. Unfortunately, select instances of self-realization are the summit of the album's achievement.

The main shortcoming of Where The Light Gets In is that it seems resolved to remain in the background; said another way, the more I try to actively engage the release, the less I enjoy it. While the argument could be made that this effect is a simple byproduct of a relaxed, melodic style of music, in this instance, it is an unfortunate consequence of using vocal talent as a crutch rather than a benchmark. This limitation is most obvious in the record's redundant middle third, which includes the lackluster "Resurrection," "More Yours" and "Death Without A Funeral."

Overall, Where The Light Gets In is a pleasant, albeit thin, release. For those who find enough here to remain engaged, feel free to stay, but the common listener will likely continue on to places of greater substance. - Review date: 6/16/16, Jeremy Barnes

Coming off of the heels of the excellent Love Will Have the Final Word, an album that dared to explore the harsh reality of pain and despair, singer/songwriter Jason Gray offers the resolution to the struggle with Where the Light Gets In. Although the album takes a more generic approach due to its celebratory nature, Where the Light Gets In is one of Gray's strongest offerings to date. "Sparrows," "I Will Rise Again" and "Glow in the Dark" are all quality tunes that inspire, not only through an unnamed storm but through the terrible pain of divorce. This gives the album a genuine weight that is seldom felt in others that aim to inspire. "Death Without a Funeral" is the lament the album revolves around and is one of the best songs of Gray's career. Although the sound is sometimes predictable, Where The Light Gets In is sure to be a landmark CCM album this year. - 6/22/16, Lucas Munachen of Jesusfreakhideout.com