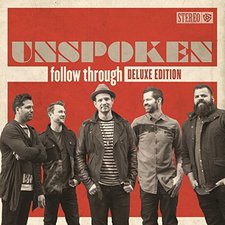 
Unspoken, a band with a great story (which involves drug addiction and redemption, and ranges geographically from Maine all the way to the Dominican Republic), quietly had one of the biggest songs of the last few years with "Start A Fire" from their self-titled debut album. A song like that gives a band a certain latitude in recording their next album, and their follow up work, Follow Through, sounds as big and bold as the band could go. A funky, soulful affair reminiscent of Justin Timberlake's best outings and Maroon 5's tuneful, radio-friendly (that's not always a put-down) songs, Follow Through glides along smoothly and cleanly, packing a sonic punch in its fourteen songs.

It all starts with the soulful and expressive voice of lead singer Chad Mattson. With shades of the aforementioned Adam Levine and Justin Timberlake, Mattson possesses a fine set of pipes that weave in and out of octaves and take many of the songs to a different level. Album opener and first single "Higher" rolls out with choppy, saloon piano chords before a wall of horns kicks in to a funky groove and Mattson delivers a smooth, rhythmic vocal about praising God in difficult times. With a choral backdrop in the bridge and a great, groovy beat, "Higher" is a terrific opener.

"Open The Clouds" follows in similar fashion, with a R&B inflected texture and some impressive falsetto from Mattson. With a nod to the classic soul tune "People Get Ready," this song will start a dance party wherever it is played. "Miracle" serves as an encouraging song of perseverance with a charge to pray and "break till your breakthrough breaks through the ceiling." "Soldier" takes its cues from the old Sunday school song "I May Never March In The Infantry" (complete with a few "field recordings" of the song), and continues the theme of perseverance. The title track is a quieter, more reflective moment that finds the band at their most persuasive and heartfelt, with a prayer for lifelong perseverance.

"So Good To Me" may be the most interesting song sonically here, with a sliding vocal and staggered and stuttering chorus-verse-chorus structure, making the tune a standout on an already impressive group of songs. "Roots," one of the additions to the Deluxe Edition of Follow Through, is a terrific slow-groove gospel song, with an African backing choir (think Paul Simon's Graceland) and instrumental nods to that continent. With a celebration of the album's theme of "who" helps the believer persevere, "Roots" would have been a great closer, both musically and thematically.

With exceptional, tuneful songwriting (with nods to many current artists, like Pharrell Williams of "Happy" fame), solid performances and a whole lot of heart, Follow Through is a sophomore album that most bands would love to put out.

Loaded with energy and unabashedly Christ-centered lyrics, Unspoken's sophomore album, Follow Through, is the underdog release for CCM this year--you might not have expected it to be one of your favorites, but you can't help but be drawn to it. A lot of radio-friendly CCM bands try to be fun and trendy, but Unspoken actually pulls it off here. Take the diverse musical palette of TobyMac and mix it with the soulfulness of Jimmy Needham, and you'll have an idea of what Follow Through sounds like. The band's musical playfulness is on full display for "Open The Clouds," which is an irresistible tune about longing for the second coming of Christ and "Can't Deny Your Love," which sounds like an *NSYNC song with a Spanish vibe and subtle EDM-styled drum builds. Even when they aren't brimming with energy, the band keeps you engaged, from the soon-to-be radio hit, "Miracle," to the closing ballad, "Wait For You." At the center of the band's sound is Chad Mattson's soulful vocals, which are so prominent that not a single word can be misheard, but never so overpowering that you can't enjoy the layered music. Though the lyrics on this album are sometimes restrained by sticking to normal CCM territory, they are never cliche, and are as good as "safe" can be. The deluxe edition tracks add nice value to the album, most notably the aforementioned highlight "Can't Deny Your Love" and "Roots" (which has the strongest TobyMac vibe). Closing the deluxe edition is the piano-ballad "Solid Rock," which was previously released on their Unplugged album. It seems a little out of place among its more polished predecessors, but it's nonetheless a beautiful song about clinging to Christ in the midst of suffering. Unspoken displayed a lot of promise with their self-titled debut and it's exciting to see the band grow and deliver one of the best CCM releases so far this year. - 8/24/16, Christopher Smith of Jesusfreakhideout.com