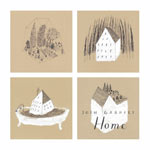 How do you follow up one of the most ambitious albums of the last ten years, the one that put you on the map and won you legions of loyal fans? Well, if you're indie sensation Josh Garrels, you go slightly smaller. Home, the follow up to the massive (both in scope and theme) Love & War & the Sea In Between, is a decidedly scaled back effort, though not without its loud moments and big theme. But gone are the booming instrumental sections and dense word-play, and in their place are slightly mellower tunes reminiscent of Garrel's earlier releases, like Jacaranda and Over Oceans. But if album titles are any indication, Home was almost destined to be a more down-home work that the epically-titled Love & War...

Opening with the orchestral "Born Again," Home establishes a slow, waltzing template for the album that serves as an appropriate tone for its lyrics calling for a renewal. "Born Again," and the following "Colors," sound like an early-morning confessional set against a chill, 70's Soul Music vibe, complete with muted trumpets and orchestration and Garrels' slow-burn vocals. In "Born Again," Garrels states, "I'm ready now to feel the power of change, my time has come to be born again" in a hushed voice that captures well the feeling of late-night, or early morning soul-searching. His confession is that he's "running scared in between what I hate and what I need," and that "the savior and enemy are both trying to take my soul." Beginning a much-anticipated follow-up album with two songs this downbeat is a risky gambit, but it establishes the pattern of soulful introspection that Garrels has come to be known for.

Things start to feel more familiar with the third and fourth tracks "A Long Way" and "Leviathan," the latter of which is an interesting take on the book of Job, and the dense lyrics about "Yahweh who gives and takes away, will you curse or bless the name, when trial tests us like the flame?"

Home cranks things up considerably with "The Arrow," a gritty blues-rock number about betrayal (either from yourself or a friend) that has hints of Led Zeppelin and Rush, particularly in the vocals. The album then settles back down for the folksy, sweet "Heavens Knife" (which has the rare distinction of possibly being the only love song around to rhyme "wife' with "knife".)

The epic and joyful "Morning Light" is the song that most sounds like it belongs on Love & War and the Sea In Between, with its clever word play and country-meets-hip-hop flow. Easily the most hopeful song on Home, "Morning Light" is a welcome bit of sunshine musically and thematically. "Always Be" offers up a prayer of devotion against a dense sonic background of beats and samples. "Home At Last" swings like an old-time Vaudeville tune (with its jaunty banjos and horn section) and "At The Table" is a great song about the all-encompassing grace of God that invites all "to come on home, home to me and I will hold you in my arms and joyful be." If ever a song truly captured the feeling of the Parable Of The Prodigal Son, "At The Table" is the one. It's an excellent album closer, appropriately joyful and rousing, like a child returning home after wandering.

"Benediction" closes out Home with Garrels singing a song of encouragement to his children (and all children of God). Reminiscent of Bob Dylan's "Forever Young," "Benediction" is the kind of heart-felt song that captures the feelings that a father has for his children.

Home is very different musically than Love & War and the Sea In Between, but it is no less epic in its scope, and feels like a natural follow up thematically. The idea of home can conjure up so many feelings all at once, depending on your experience with the idea. But as C.S. Lewis says, the true home we all long for is perfect and our hearts search for it our whole lives. Home masterfully captures this idea, and finds Josh Garrels continuing his ascent to being one of the finer, more introspective and adventurous songwriters around today.