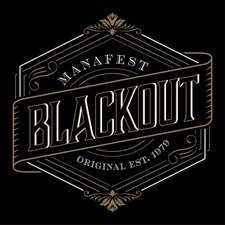 
Canadian rap/rock artist Chris Greenwood--better known as Manafest--has established himself as one of the elder statesmen of Christian rap-rock, with nearly two decades and 10 studio albums under his belt. After a very successful decade releasing six albums on BEC Recordings, Manafest is now six years into the fully independent phase of his career, and he certainly has never been one to rest or get too comfortable in a certain style. From his early days as a pure hip-hop artist, he transitioned to a more rock-focused sound with less rap influence. As his major label era neared the end, he began to focus on electronic elements, before again returning to his hip-hop roots as he became independent. Now 18 months removed from his tenth studio album, This Is Not the End, Manafest has dropped Blackout, a new six-song EP (well, sort of) that is one of the most enjoyable rock listens so far in 2021.

Truthfully, Blackout is a very tight three-song EP featuring three extremely strong collaboration tracks, and then instrumental versions of each song to bring the total to six tracks. The title track is a lament of substance addiction which builds on Manafest's powerful verse raps over a mid-tempo acoustic guitar into a giant-sounding anthemic chorus, sung by Nashville singer Sam Tinnesz. Canadian rockers Redlight King provide the backup for "Save You," a growling riff-heavy rock song which would be at home on a Love & Death album, as Manafest and Mark Kasprzyk defiantly warn the listener that the enemy only seeks to destroy ("I have my shield, I have my strength / I have my soul and I have my faith / I give my word that it might get violent / This is not time to be silent"). The album ends by moving to a more energetic electronic-influenced hip-hop sound with UNSECRET collaboration "Light It Up," lyrically the least poignant on the EP, but a track born ready for radio or commercial placement.

Throughout its strong variety of reflection, defiance, and booming energy, this EP consistently sounds great, with enormous guitars and stellar vocals throughout (both Manafest and his collaborators). Manafest's albums have generally featured some strong numbers amidst a handful of easy skips, but this lean and hard-hitting ten-minute EP is one of the most enjoyable experiences I have had listening to him since his best BEC days. I'm not sure the purpose of the instrumental tracks to double the EP's length--I certainly don't recommend them if you're purchasing the tracks for download, since the vocals and lyrics are a real strength--but the core of Blackout is a great listen and a sign that the ageless Manafest is in a strong late-career groove, and likely has plenty more great music left in him.