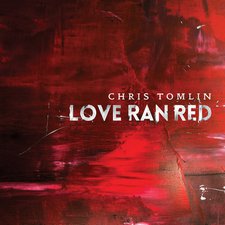 The release of a new Chris Tomlin album is a certifiable event in Christian Music, the kind that there are not so many of anymore. Tomlin's songs are so embedded into worship services at this point that it's hard to remember a time before "How Great Is Our God" and "Forever" were part of your church's Sunday morning (or Wednesday night youth group) service. When an artist reaches this level of ubiquity (think U2 or Taylor Swift in the general market), it's notoriously difficult to actually think of the new album purely on its own terms. There is a history, a track record and a general perception of that artist that colors how we hear the new music. There is also the discussion of what connotates "growth" for an artist, and how the new album stands up to other albums by that artist.

Love Ran Red comes with all these "attachments," but if listened to on its own terms, the album is a nice piece of worshipful pop that does not redefine worship, or music in any sense, but does present Chris Tomlin as a sincere seeker of God and a more-than-capable songwriter.

"Greater" kicks off the album with a slow-builder of a worship song, and in direct contrast to the last few Tomlin records, lets the album build up momentum instead of kicking off the action with the fastest tempos the album has. The radio single "Waterfall" follows, and ups the beats-per-minute ratio quite a bit. "Waterfall" is a nice pop song, with a lyrical theme that is unfortunately over-done in worship music. This invites a discussion on the ways to write worship songs with fresh ideas. (But that is a discussion for another time.)

The album's centerpiece, "At The Cross (Love Ran Red)," nicely takes elements of the old hymn "At The Cross" and dresses them up in new clothes. This re-working of old hymns is one of Tomlin's strongest skills as a writer, and this song, with its slow build, familiar elements and grand theme serves as one of the album's finest moments.

However, it's not the album's best moment; that would be "Boundary Lines." With its skittering, skipping drums (which sound a bit like Mutemath), and moody electric piano intro, "Boundary Lines" takes a slightly more nuanced theme (God's ways, his standards) and celebrates them by saying "The boundary lines have fallen in welcome places." The song then opens up into a grand chorus with another water theme, but this time, it feels fresher in comparison to "Waterfall."

Love Ran Red improves steadily towards the end of the album, with "The Table" riding a mellow, gospel groove (with a feel of the classic "People Get Ready"), and showing a new side of Tomlin's writing. "Psalm 100" is a nice, literal use of that passage's verses of praise, and the slower "I Will Boast" ends with a nice piano refrain that makes use of the title track's melody to bring the album's theme full circle. "Jesus This Is You" ends the album (in the "non-deluxe" version) well with an epic, theatrical melody that makes good use of a choir in the tail end.

Love Ran Red is a bit like a sequel in the (new) Hollywood tradition. It may not equal the best entries in that particular series of movies, but at its best, it reminds you of what you liked about the movies in the first place. Love Ran Red is a solid entry in Chris Tomlin's growing body of work, and an album that adeptly celebrates Jesus and His sacrifice.

Chris Tomlin knows what makes people listen and what gets played in churches and on the radio, and he is very good at making that type of music. Love Ran Red is no different; in fact, it may be Tomlin's best example yet of that type of music. Unfortunately, this also means Love Ran Red is of incredibly limited artistic value. Formulaic to a "T" and covered with almost every worship cliché possible, Love Ran Red will certainly satisfy the masses, but few others. For something equally God-praising with boatloads more creativity, get Kings Kaleidoscope this week instead. - 10/26/14, Mark Rice of Jesusfreakhideout.com