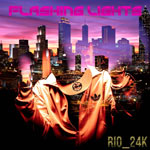 Floridian rapper Rio_24K may be new to the Christian faith, but he's certainly not new to hip hop. Nor is he new to the trials and temptations of the world. But now, after giving his life to Christ, he's changed the message of his music, and now he's ministering the Gospel of Jesus Christ to an increasingly wicked culture. His first Christian rap album is called Flashing Lights, and it's clear with one listen that his target audience is the unsaved people still living in the same world from which he came. Comparable to artists like Skrip or The Cross Movement in overall sound, Flashing Lights can be an effective ministry tool as well as, for some, an enjoyable album to listen to. "The Lights" is a smooth, sort of jazzy hip hop track that has a little bit of an outer spacey vibe in the hook, while tracks like "Mvrder" and "Strangers" are more on the gangster rap side of the spectrum. Some of Rio's best rapping comes late in the tracklist in the song "Not The Same." Vision's verse in this track is so-so, but Rio really feels at home on this one. One thing that's apparent throughout various portions of the album is that Rio seems to imitate other Christian hip hop artists at times. Whether it's intentional or not is unclear, but I definitely hear bits and pieces of Trip Lee, Eshon Burgundy, as well as a lot of Lecrae influence. It tends to take away from his own identity, but he's still able to maintain that aspect, especially when he uses his past and experiences as the catalyst for the song itself. Rio_24K is an up-and-coming artist that you may end up being very familiar with in the next few years. I'd like to hear a little more of his own personality interjected into his overall style, but on the whole, Flashing Lights is a rather impressive album, and it comes with a fairly easy recommendation. - Review date: 1/12/15, written by Scott Fryberger of Jesusfreakhideout.com 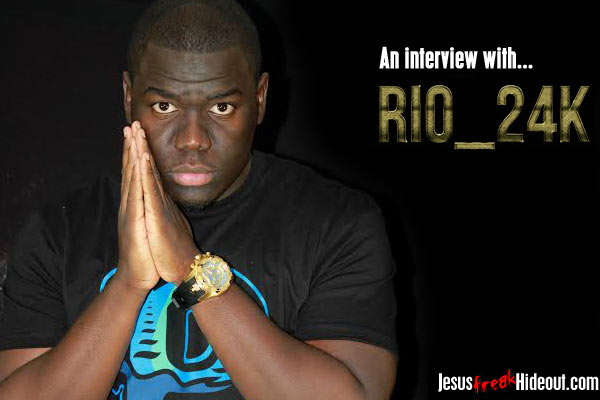 Rio_24K: Well Mario is my first name. I use to go by the name Cash Carter when I was doing secular rap. Since then I decided go with a different name and wanted something that represented me and a change that God has done for me in my life so I decided to go with Rio and added 24K because 24k represents the purest form of gold and I used that as a representation for the purest form of myself and my purity with God in my corner. Rio 24k = Real 24K

Rio_24K: Yeah of course I originally thought about going out into the mission field I actually still think about it. Hip Hop really came into place when everyone gravitated to my song "Forever" which is the second song on the Album.

Rio_24K: Well I would say I came from a street background a place where there is no way out I really see it as. I hit a point in my life where no matter how much, women, money, and local fame I accumulated I still felt empty. I had family and close friends die around me and was involved in gang activity I felt as if every day I was going to die I became paranoid sleeping with my gun next to me and even a situation of pointing my gun at my mom. I hit a point of just using drugs to escape but as much as I used drugs I couldn't get away from it so I called my brother who was active in church and decided to attend and he set me up with some people who helped me in the process of being saved and dying to my old self.

Rio_24K: I would say I was inspired lot of artist and a lot of people who are not artist. But just to name a few I would say J cole, Nas, Lecrae.

Rio_24K: Well I felt like this was my introduction into the Christian Music world and wanted to just give my supporters some free new faith inspired music. I plan to sale my next project but always have some free music to give.

Rio_24K: Yeah I'm actually working on my new project "Stanger In My Own Land" looking to release that and another project lord willing two this year.

Rio_24K: I really don't believe there is one song they should just give a listen to but if I had to pick I would go with my song "Forever" just because I share my life and a little of my testimony along with a nice flow and lyrics with a smooth sample hook.

Rio_24K: My favorite video game would be "Final Fantasy" use to spend hours on them I actually had all except the last one.

Rio_24K: If the possibility comes yeah I will definitely be on tour that actually was for 2015 was to start touring.

Rio_24K: To have patience and understanding that my life will not go as I planned it but as God planned it, to continue to keep him first and not forget my purpose is to spread the gospel and bear fruit.